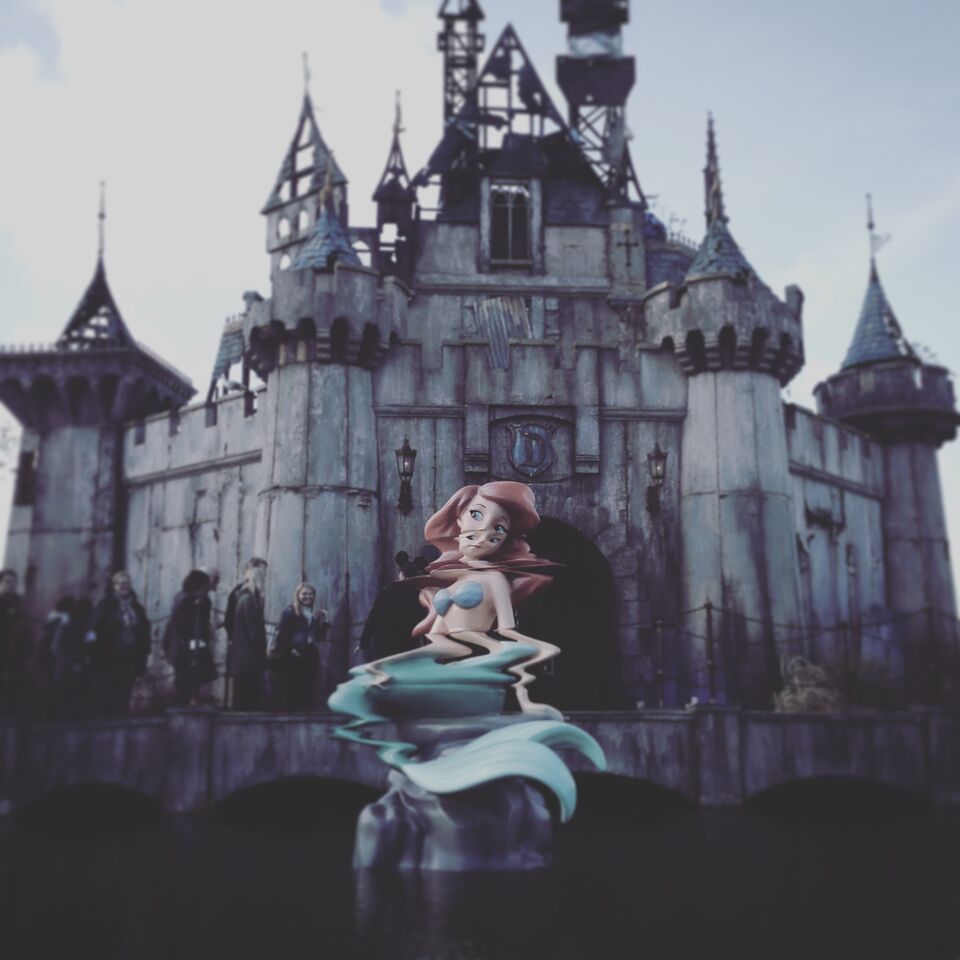 Even if you’re not familiar with Banksy or the world of modern art, the chances are you will have seen something in your social media feeds recently relating to Dismaland.

The dismal mood was determined from our initial set-off, with overcast skies, rain pouring down and a 4 hour journey ahead of us. But despite an unthinkably early start, our spirits were high and filled with anticipation for the mystery of what Dismaland had to offer. After all, we were aware that this was a once-in-a-lifetime opportunity.

And boy did Dismaland have a lot to offer! Upon entrance, visitors entered a whole new world, literally, greeted by rude and hostile security guards, hurling abuse and looking wretched. Guests, including us, were highly amused by their ill-mannered welcome. It was clear all around that Dismaland’s disconsolate staff were entertaining guests yet, in a normal everyday situation I’m sure people would not stand for such service. Let’s be honest, who would’ve thought that people would pay money and come from far and wide for a promised dreadful time? 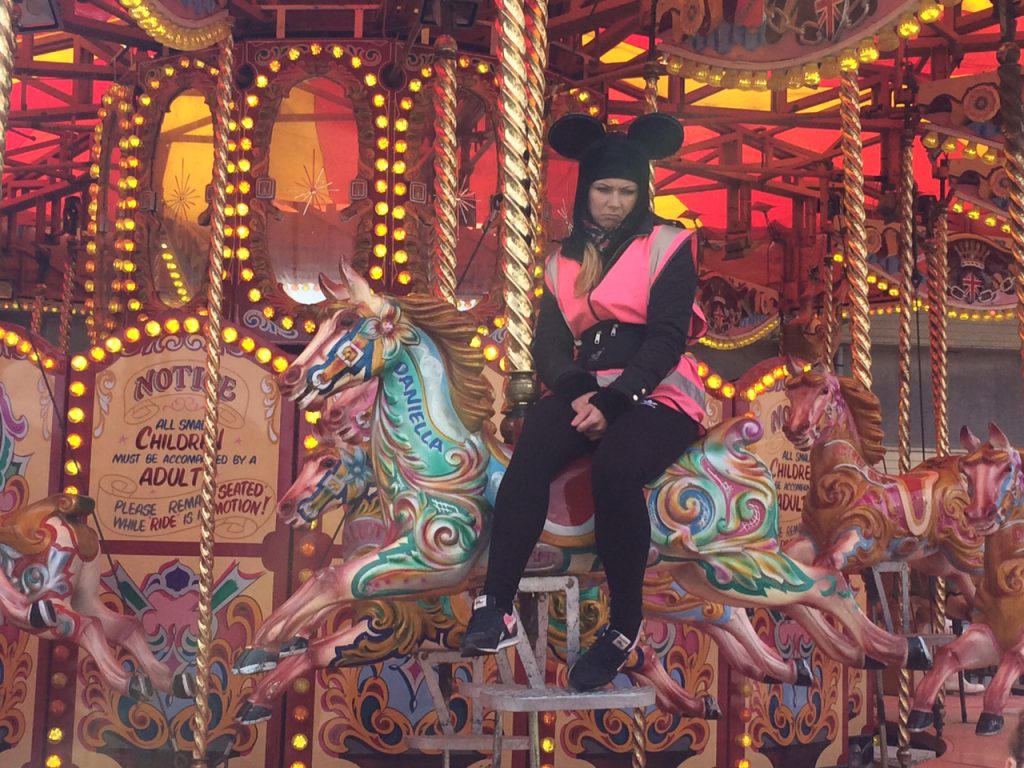 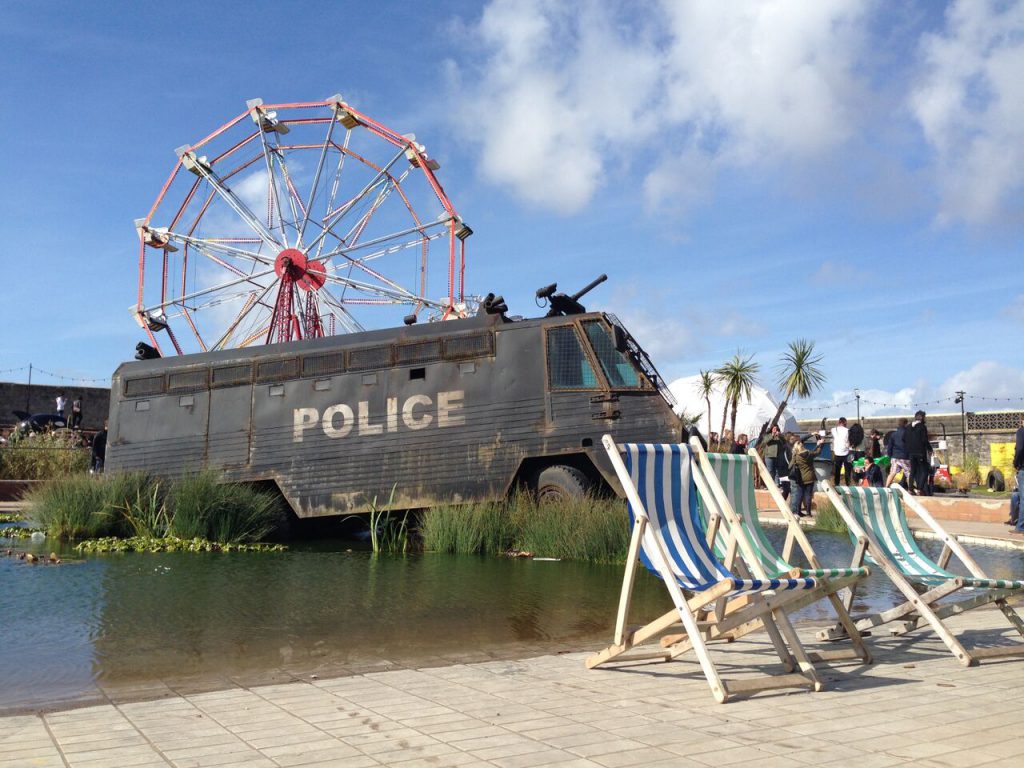 Philosophical thoughts and ideas were threaded into every aspect of the park and not only did the park test the limitations of art, it also challenged the mind-sets and opinions of all the visitors that attended. Banksy’s political stance was present throughout all of the work and I’m sure I speak for all Dismaland guests that it leaves you questioning political concepts for a long while after.  Dismaland also stands to represent a new, modern attitude among society; 30 or 40 years ago, the statements and ideas showcased at Dismaland would have been banned, but the Dismaland installation has reawakened our freedom of expression.

It is apparent that one of Banksy’s key purposes for creating Dismaland, was to place a spotlight on the inequality and mediocracy of the art industry. He said in an interview (which he only gives via email) that “The art market certainly doesn’t encourage creativity. Like most markets it rewards being able to reliably deliver recognisable product on a regular basis.” He also stated “I think a museum is a bad place to look at art.” Dismaland is undoubtedly like no other art installation and perhaps that was one of the principal appeals for visitors; to be part of something that differentiates our everyday lives and regulated routines.

If you’re wondering where the idea for Dismaland came from, you can rule out the misconception that it is based on Disneyland.

Banksy detailed in an interview: “This show is modelled on the failed winter wonderlands they build every December that get shut down by trading standards – where they charge £20 to look at some Alsatians with antlers taped to their heads towing a sleigh made from a skip.” The creation of Dismaland is a comment on the indecorous and lacklustre theme parks which pass as family entertainment. Banksy suggests that we attend these sugar-coated attractions and are oblivious of the true validity of it, all whilst turning a blind eye to the real problems around the world.

But beyond the philosophical and political unrest, the art was pure genius. The distorted Ariel really did give the impression that your photo was faulty. From the smallest details to the play on words, it was inspiring to see such originality and creativity. While everything was intended to look a mess or ruined, it was incredibly clever and inspirational. In its chaos came an appreciation for the thought that was put into each piece of work. 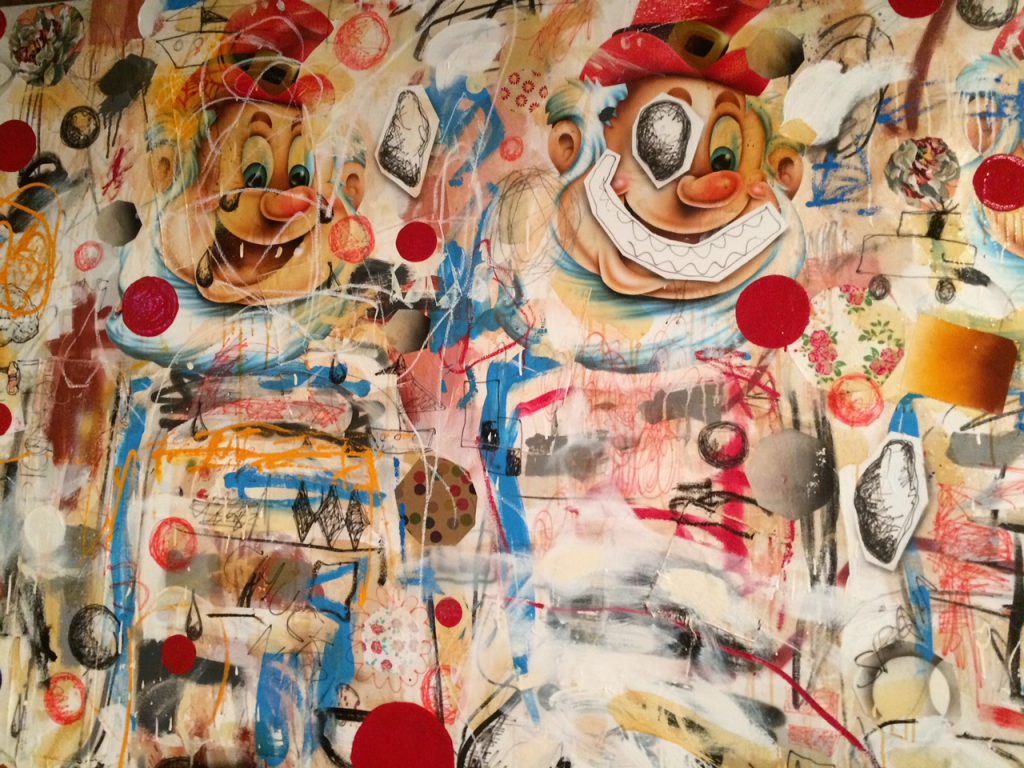 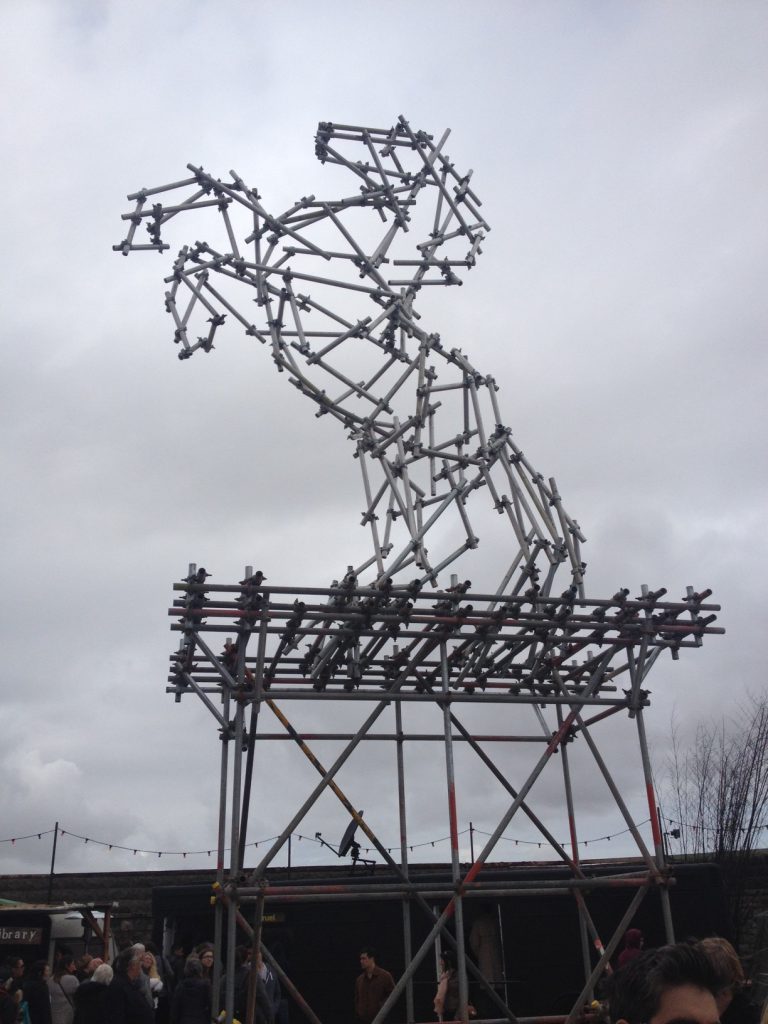 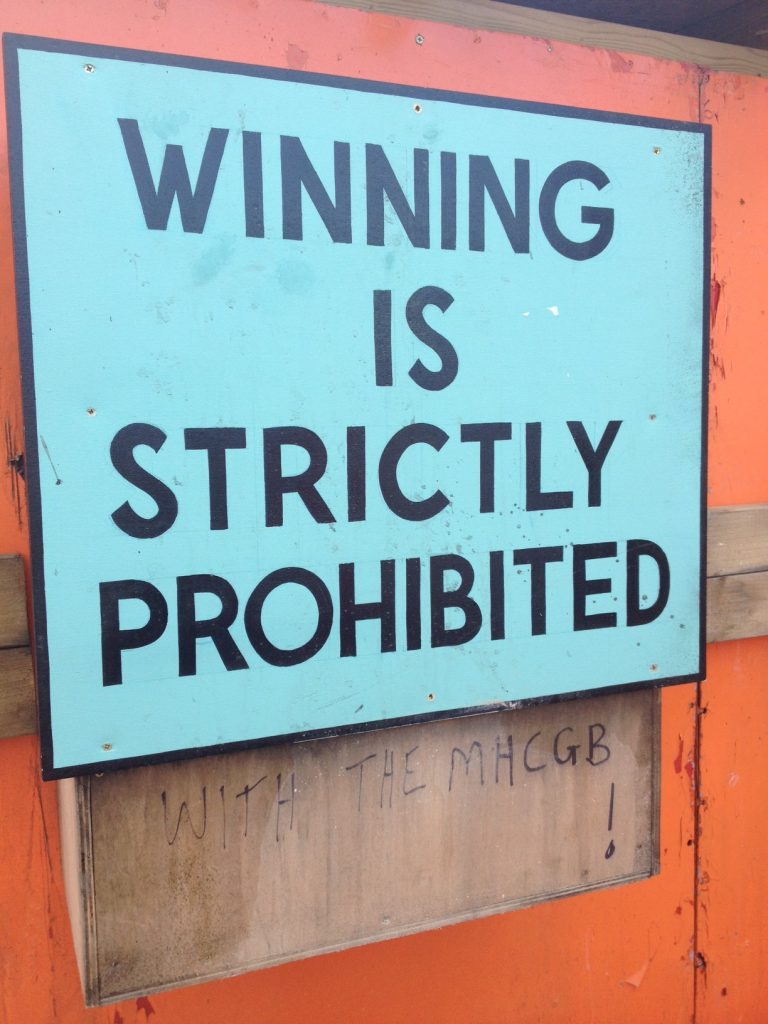 So what made Dismaland so successful? Banksy’s artwork has always been shrouded in controversy and this is no exception. Everyone has or has had an opinion on Dismaland and despite negative or positive comments, what Banksy aimed to do was question the norms and acceptance of art and capitalism. Banksy and all the other artists have sparked conversation over issues that are current today yet are overlooked by most.

Prior to visiting Dismaland, we had read reviews and heard other visitors’ opinions of the attraction, all of which created a bleak expectation of the theme park (leading giveaway being the title itself). But what we learned was that it was all part of the experience that Banksy had created. If the day had been cheerful and bright I’m sure we wouldn’t have taken as much from it. The greatest part was to realise that through voluntarily subjecting ourselves to a truly dismal experience, we actually had a great time and will be talking about it for months to come.

(All photographs copyright to sixredsquares ltd) 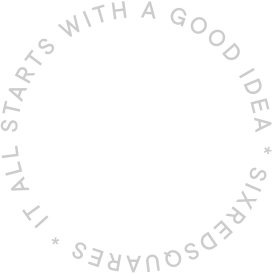 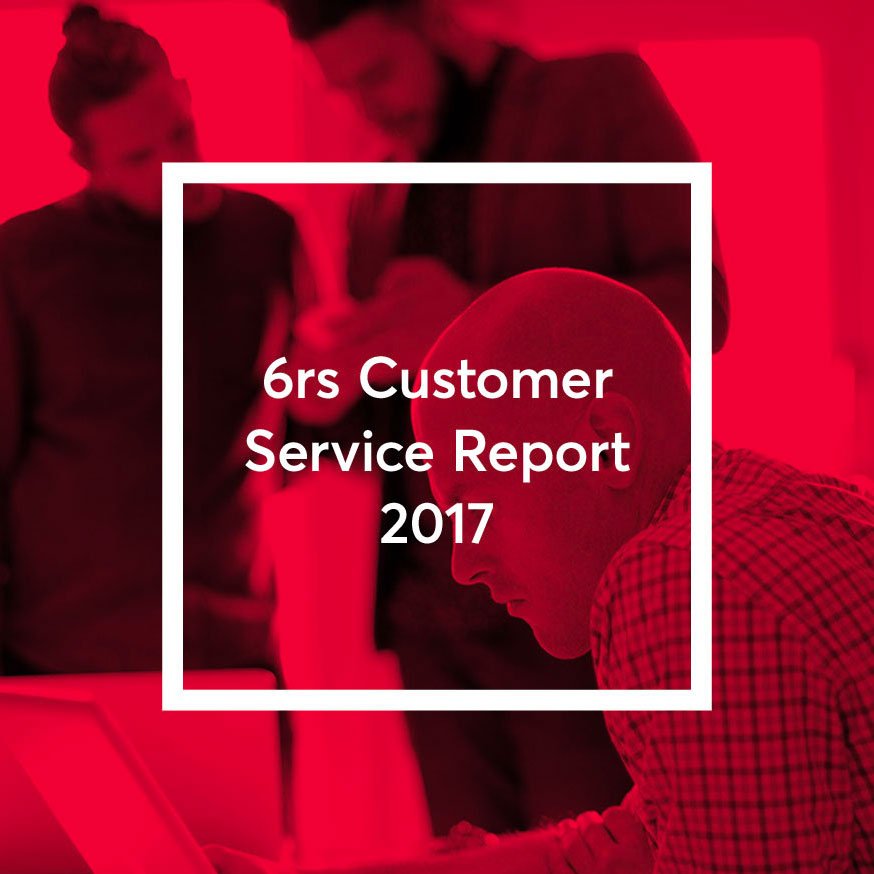 We scooped 3 awards at the Essex Digital Awards! 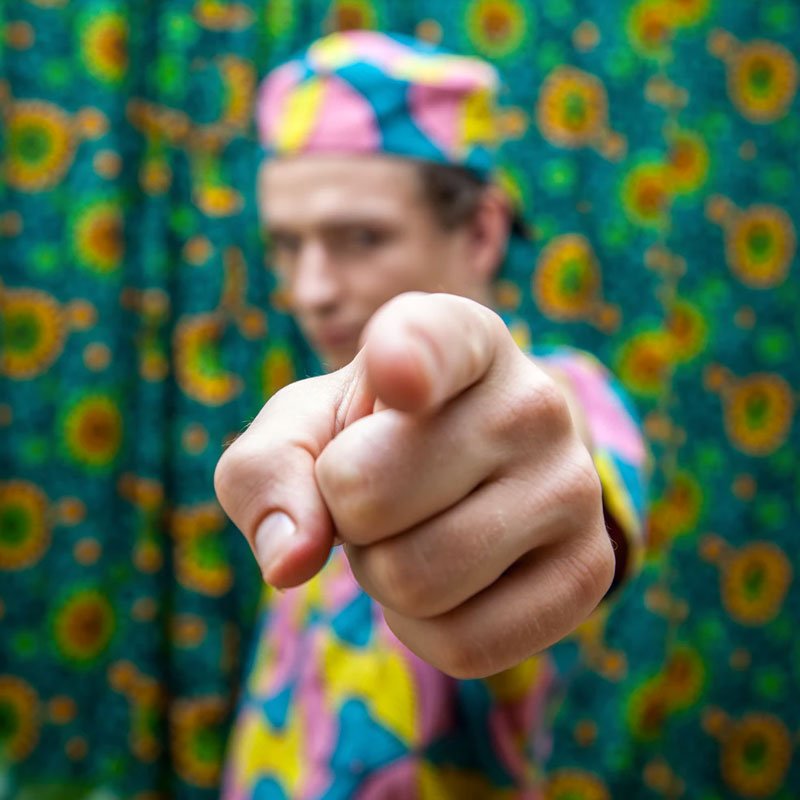 The Apprentice shows us how not to create a brand 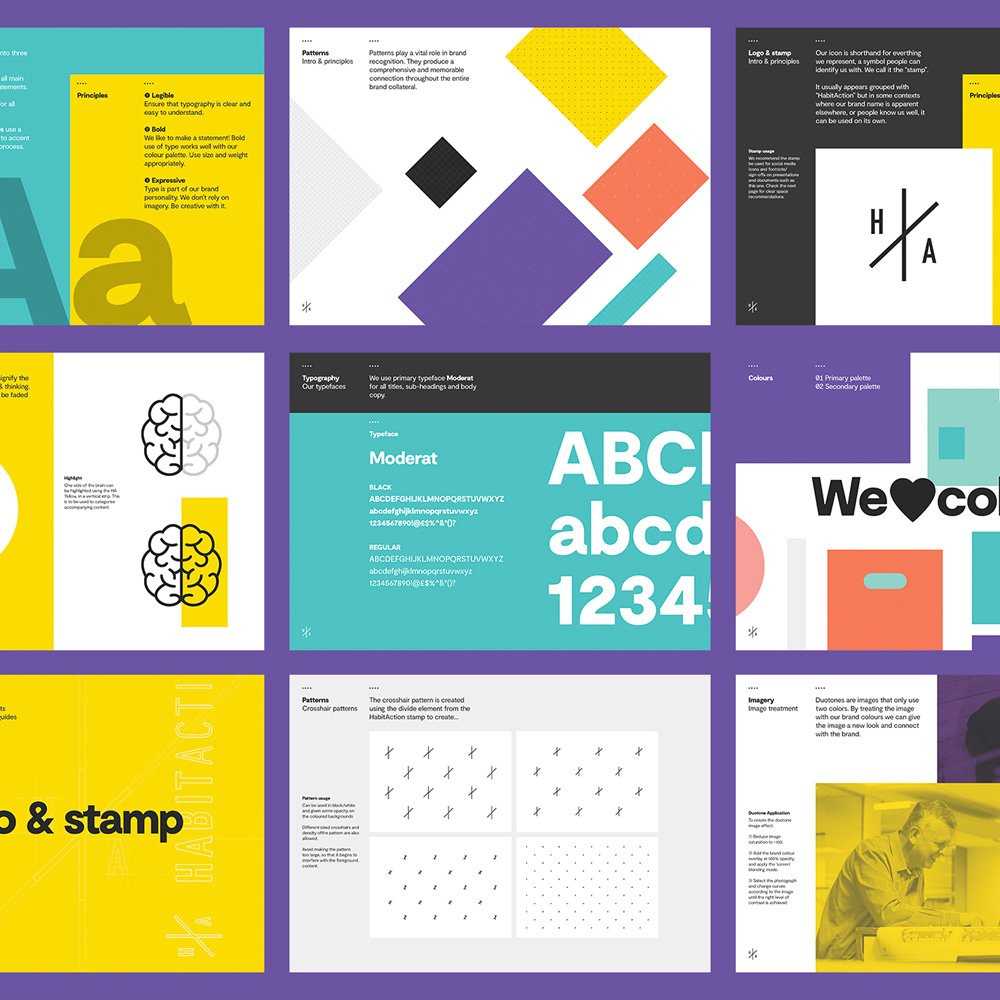 What are the benefits of brand guidelines? 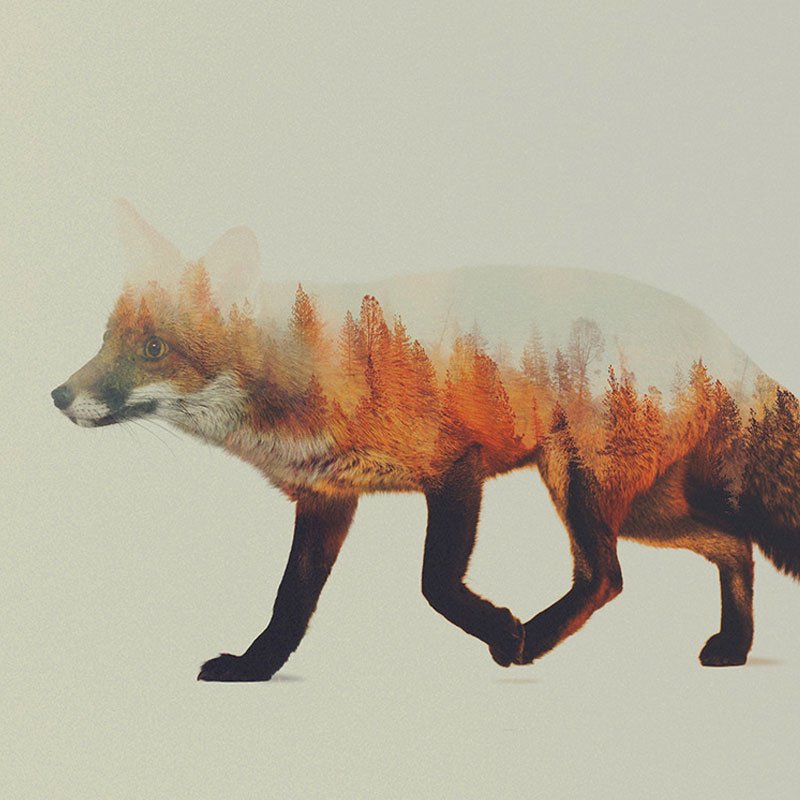 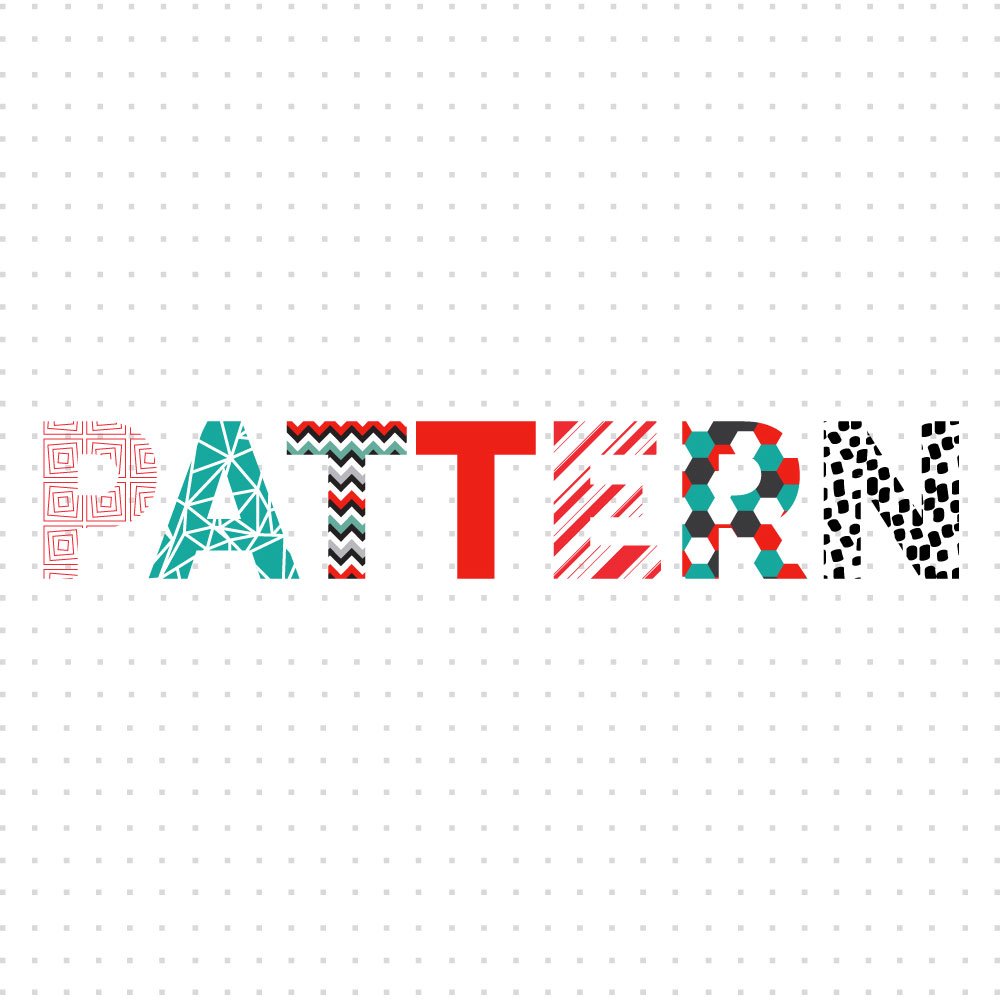 The power of pattern 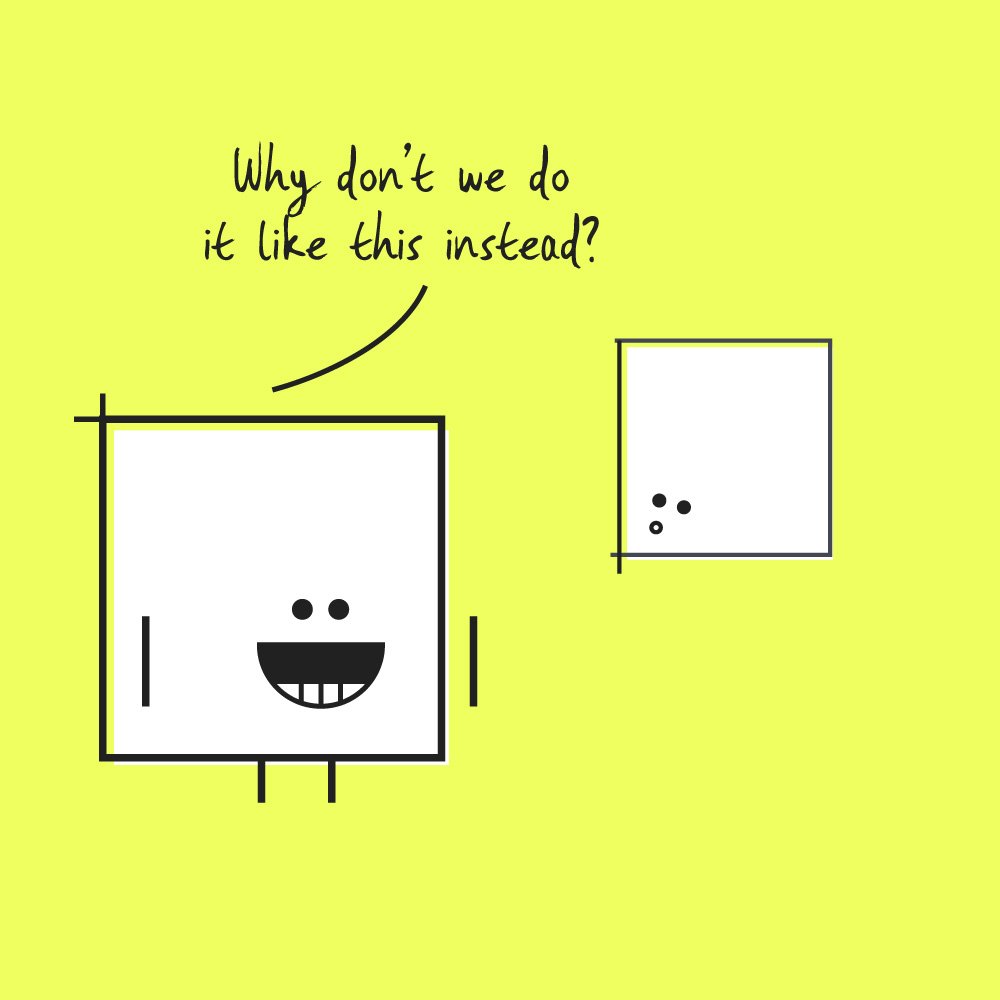 Are you a Feedback Fiend? 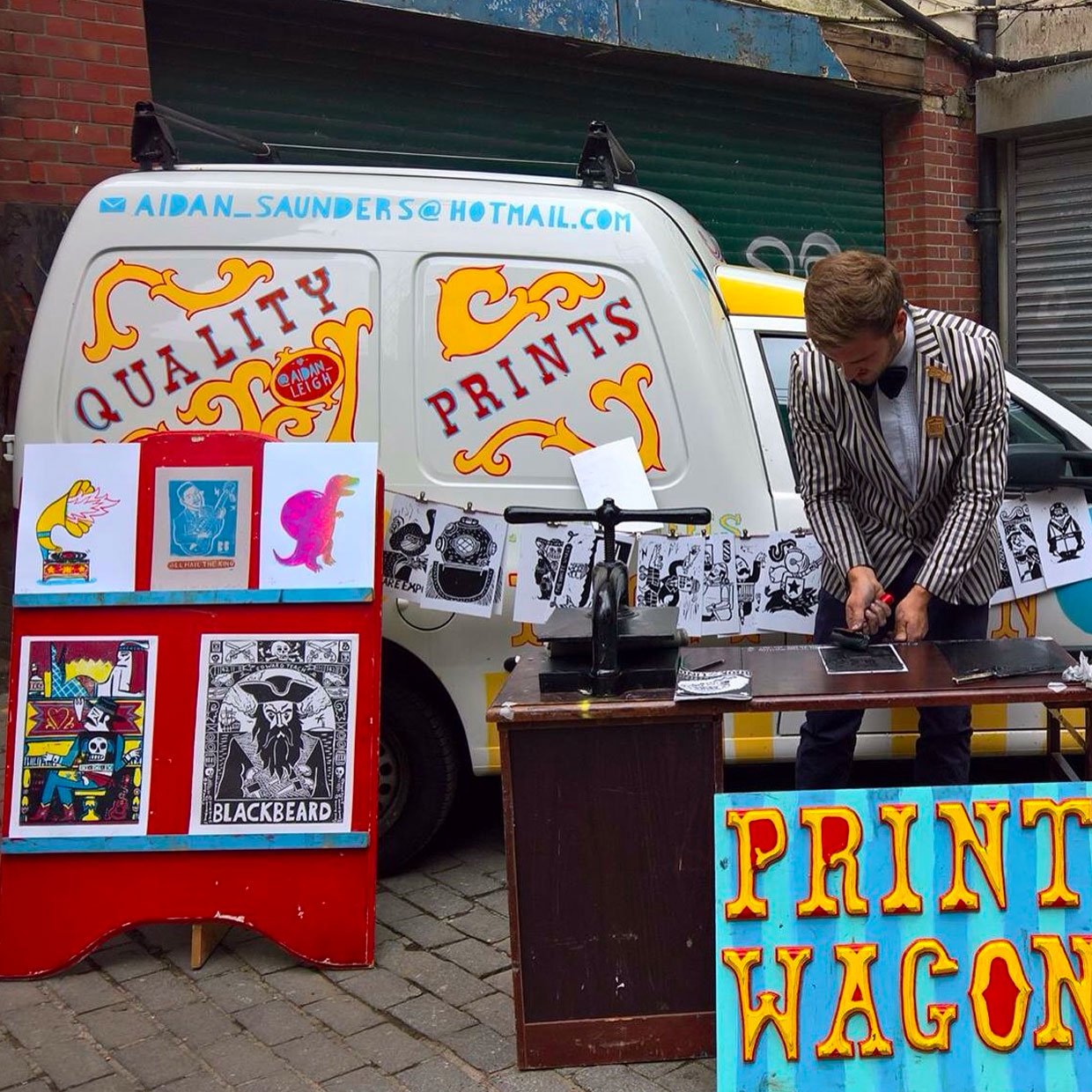 All aboard the Print Wagon! 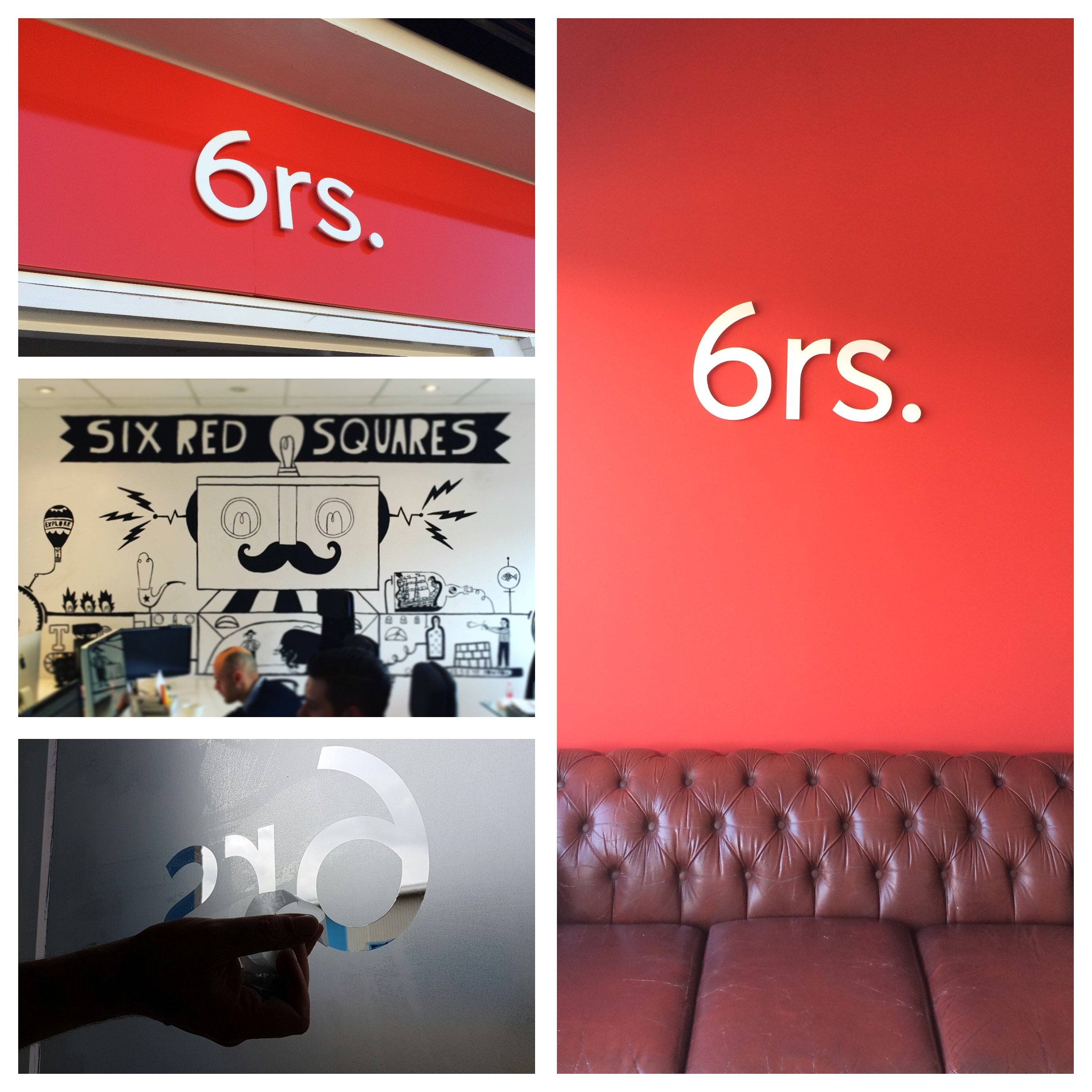 Make your space your own 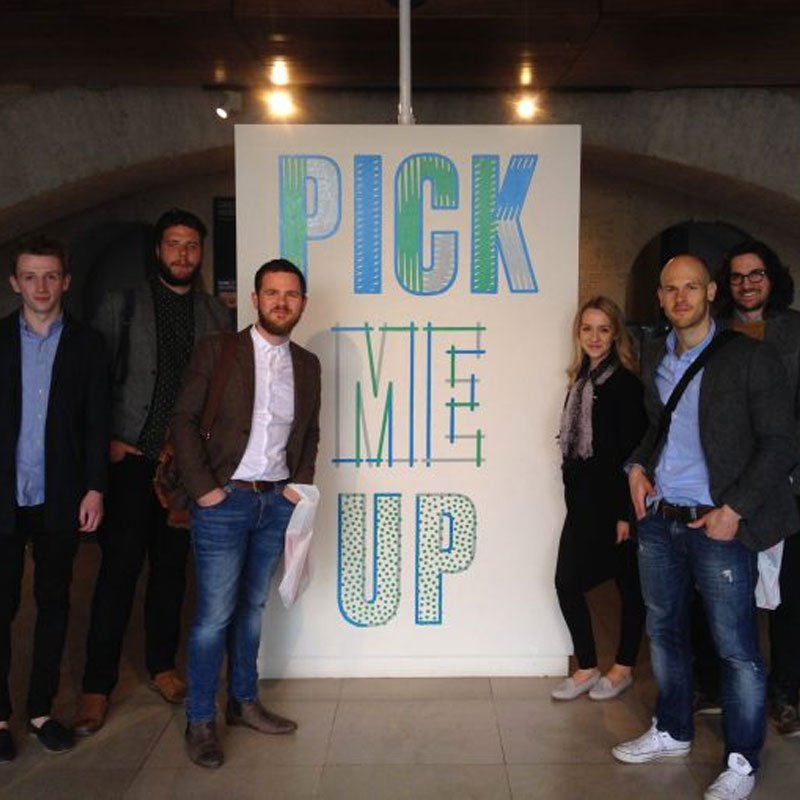 This website uses cookies to improve your experience while you navigate through the website. Out of these, the cookies that are categorized as necessary are stored on your browser as they are essential for the working of basic functionalities of the website. We also use third-party cookies that help us analyze and understand how you use this website. These cookies will be stored in your browser only with your consent. You also have the option to opt-out of these cookies. But opting out of some of these cookies may affect your browsing experience.
Necessary Always Enabled
Necessary cookies are absolutely essential for the website to function properly. These cookies ensure basic functionalities and security features of the website, anonymously.
Functional
Functional cookies help to perform certain functionalities like sharing the content of the website on social media platforms, collect feedbacks, and other third-party features.
Analytics
Analytical cookies are used to understand how visitors interact with the website. These cookies help provide information on metrics the number of visitors, bounce rate, traffic source, etc.
Marketing
Advertisement cookies are used to provide visitors with relevant ads and marketing campaigns. These cookies track visitors across websites and collect information to provide customized ads.
Others
Other uncategorized cookies are those that are being analyzed and have not been classified into a category as yet.
SAVE & ACCEPT
Powered by